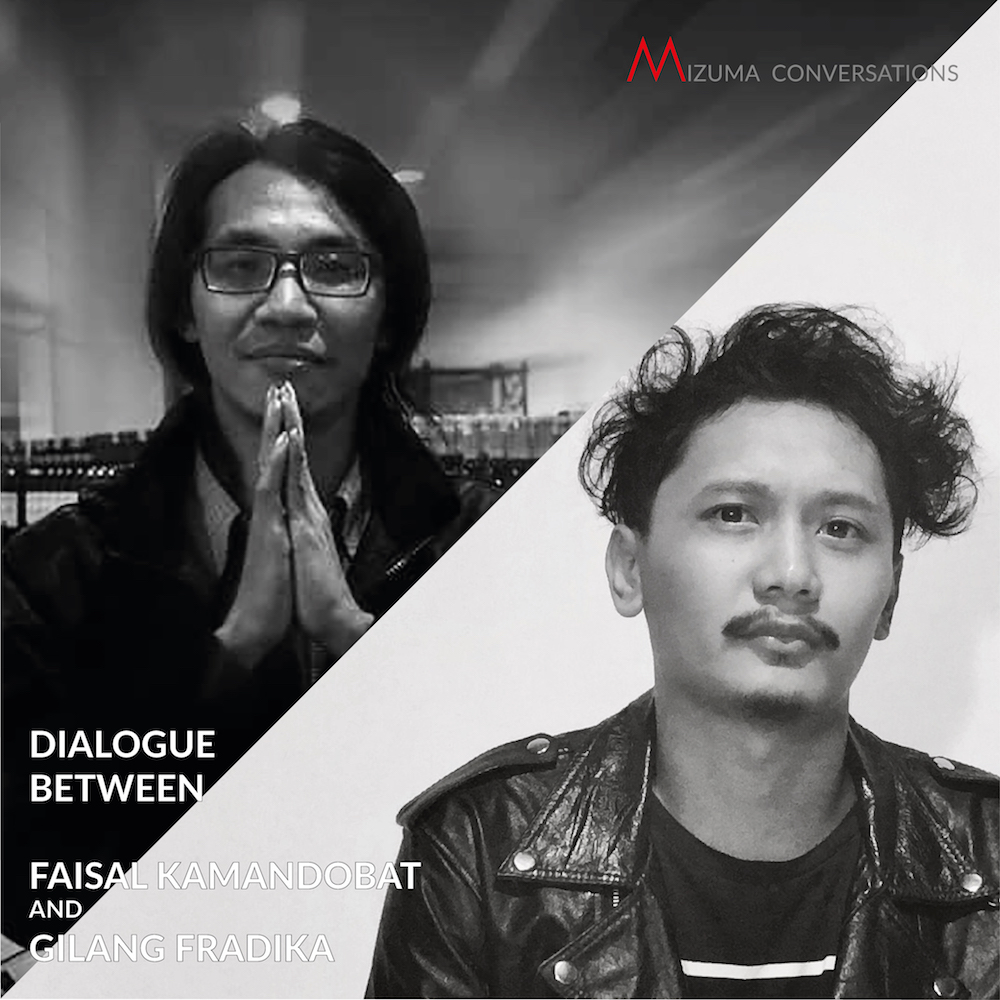 “Your paintings seem to possess a lyrical and sensual elegance. But the themes contain human suffering. Can you explain this dichotomy?”

Faisal Kamandobat graduated from Anthropology Department of Universitas Indonesia, Jakarta. As a writer, his poems and essays have been published in several mass media and journals. Faisal has also been invited as a curator, a guest writer, and an artist who took part in several exhibitions. Faisal is currently a researcher at Abdurrahman Wahid Center, Universitas Indonesia, Jakarta.

Gilang Fradika graduated from UNY (Yogyakarta State University), Department of Fine Arts, with a major in Graphic Arts in 2012. Working mostly with two-dimensional surfaces, particularly in painting and etching, Gilang’s work process attempts to understand the interaction between creatures and the social response of people, with imagined objects as alternative forms and metaphors. These objects are a combination and deformation of many overlapping images: the anatomy of the human body, plants, animals, and the occasional pop culture icons.

Faisal Kamandobat (Faisal): Your paintings are rich in fantasy. Can you explain the personal and social background?

Gilang Fradika (Gilang): For a while now, my interest in fantastical fictional objects dominates my works visually. This interest grew because of some things that I consume as a reference, popular media such as films, video games, music, books/comics, and of course the works of artists from the previous era.

To me, fantasy can also be a false reality for us to learn new things that we encounter every day in our real life. Through fantasy, things can be discussed more fluidly and less rigid. It is different from, for example, social realism artists who narrate their themes in a more direct manner. In my works, I use the elements of fantasy, so that viewers do not immediately find the conclusion, but rather encounter layers that they can enjoy and unravel one by one. So, in my work process, fantasy is a way of seeing something, not just according to its meaning as we know, but as an alternative way to interpret our daily reality.

Faisal: You were born in a small town in Central Java, and global culture has influenced your mind since childhood through television and books. What do you think about this phenomenon, especially related to local-global relations and the potential for world culture to be more uniformed in the future, including in the arts?

Gilang: I actually grew up in a family environment that did not introduce me to the culture of art, something that perhaps also happened to most children who grew up in small towns at that time. That visual aesthetic was experienced only through TV and limited books/comics that I could access. I used to spend my free time watching many Japanese anime that aired on TV, and reading various books and comics such as Goosebumps, Japanese manga like Dragon Ball and Kenji, Disney comics like Donald Duck, and also playing Sega video games and Nintendo.

It is very different, of course, if we compare it to now, whereby each person can easily find things that interest them and choose their references. So it is likely that there will be more choices in the future across all fields, including the arts.

Faisal: In your paintings, popular cultural icons are used to convey different ideas and messages, such as consumer society, immoral competition, and exploitation of nature. Are you doing this as a communication strategy with the global community, or do you have other arguments and motives?

Gilang: There is a reason why I choose popular cultural icons, especially characters from Disney. Evidently, Disney’s comics were used as my initial references for creating my works. However, in the early years of my practice as an artist, I did not feel that I had found the right way to combine those forms with my artworks. I continued to experiment and finally presented the first artwork that included these popular cultural icons in Summer Kisses, Winter Tears (2019). Furthermore, in a different and evolving process, I present these characters as metaphors for broader ideas, specifically as a metaphor for superpower, changing the composition as I see fit to my ideas. As a gigantic and universal visual media industry, Disney is celebrated across generations globally, with all its messages and effects.

Faisal: In the history of art, the fantasy approach has been widely used by artists. What distinguishes your fantasy from the previous generations of artists?

Gilang: There is no difference, I just try to rework their approach. Since I was in college, I was interested in artists who were often referred to as the Surrealists, such as Hieronymus Bosch (predecessor of Surrealism), Salvador Dalí, and Rene Magritte. Through the internet, I got to know the works of Asian artists such as James Jean and Keiichi Tanaami. 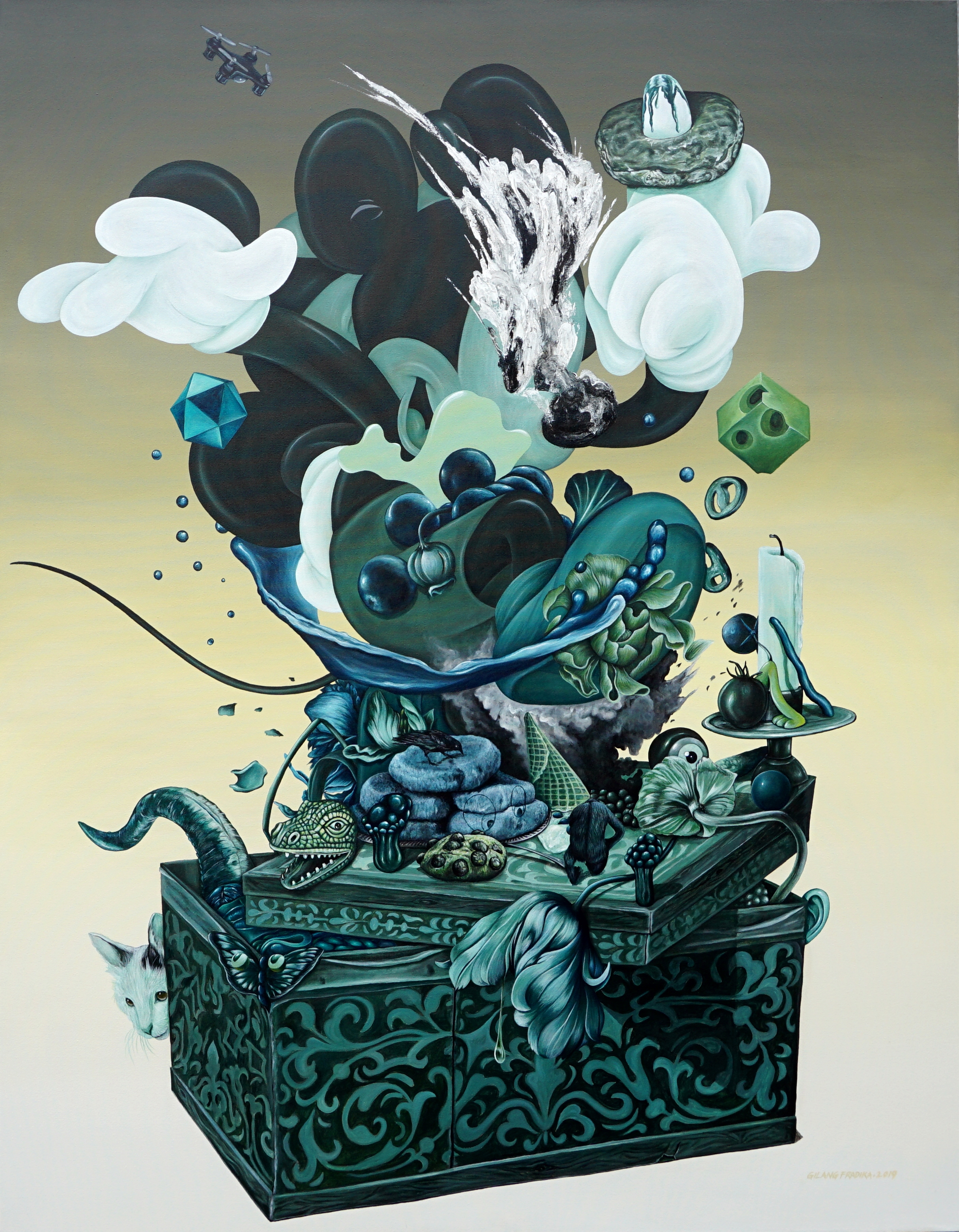 When Surrealism emerged in the early 20th century, Surrealist artists used their works to critique a number of topics and things that were relevant in their time. Similarly, Keiichi Tanaami employed American popular culture to raise social criticism relevant to his era. The same is true with my current work, especially works that use global themes. Perhaps the only difference is the era—their era and our current era now. Technically, I don’t think there is anything that distinguishes my approach from those of the previous artists.

Although I use the approach of fantasy as an alternative way of interpreting everyday reality, I do not consider myself a Surrealist artist, as I do not wish to be compartmentalized and be stuck in a specific category. I want to let my practice flow and evolve naturally.

Faisal: Your paintings seem to possess a lyrical and sensual elegance. But the themes contain human suffering. Can you explain this dichotomy?

Gilang: I think sometimes to present the theme of suffering, we don’t have to explicitly show it. Suffering can be processed and made into a multi-layered understanding in order for viewers to absorb it. I do not see this as a strategy, but rather just something of interest that comes and grows naturally. Personally, I am more interested in using language and art as a way to convey a message, not just about whether or not the message gets delivered successfully.

Many people think that my early works were abstract. They saw the distortions of objects in my paintings, and felt that as there were no figures to interpret, then they must have been abstract. When in fact, for me, all my paintings are figurative. Now by having recognizable characters in my works, I provide a point of entry for viewers to read my works.

Faisal: Looking at your paintings, I see that you are quite concerned with environmental ethics. How do you see the pandemic phenomenon? On the one hand, this disease is a threat, but on the other hand, it helps in cleaning and healing nature.

Gilang: I am not in a position to discuss this pandemic in detail, good news amid bad news related to this question. The effect on the environment is clearly positive as human activity decreases, and pollution is drastically reduced for a while.

Faisal: From the pandemic, we find a lot of phenomena, ranging from environmental, economic, political, moral, and mental. Some of these phenomena are quite close to the themes of your paintings. Are you going to make artworks from this pandemic situation?

Gilang: Basically, every artist ought to produce works in any situation and condition. In this period of time, I continue to work as usual. I am still interested in the correlation of natural objects that I present in visual works. Personally, I am not the type of artist who makes works based on ongoing phenomena—I am more comfortable responding to anything randomly, which in my opinion, needs to be visually spoken, and this can be completely unrelated to the existing phenomena.

This dialogue took place through email exchanges between Faisal Kamandobat and Gilang Fradika between June to July 2020.