Mizuma Gallery presents “Birth and Death Bridge”, a solo exhibition by Japanese artist Keiichi Tanaami. In this show, the artist reveals the depths of his personal universe through 12 sharp and vivid acrylic paintings.

Keiichi Tanaami was born in Tokyo in 1936 and graduated from Musashino Art University, Tokyo. As a successful graphic designer, he worked for legendary rock bands like The Monkees, was the first artistic director of the Japanese monthly edition of Play Boy, and collaborated with numerous fashion designers such as Paul Smith and Mary Quant. Since the 1960s, when his work played a significant role in introducing pop art and psychedelic culture into Japan, he has crossed the boundaries of media and genre, going beyond the confines of graphic design such as art direction and illustration, to work with a wide variety of mediums including animation, experimental film, painting and sculpture. An iconic forerunner as a multitalented artist, Tanaami continues influencing generations of artists across the globe.

His own influences range from pre-war kamishibai heroes to American B movies, from manga author legend Tezuka Osamu to pop art guru Andy Warhol, from film icon Marilyn Monroe to Sergei Eisenstein’s montage theory. The subject matter of his work, however, is deeply rooted into his experience of the Tokyo bombings through World War II: roaring American bombers, Japanese searchlights scanning the skies, firebombs and flares dropped from planes, the city a sea of fire, fleeing masses, and the flashes of the bombs reflecting off of his grandfather’s deformed goldfish swimming in his tank. “Dreams and reality are all jumbled up in my memories.” says Tanaami, and these memories, changing daily as if at their own convenience, greatly sway who I am.

These half-dream, half-memory visions appear in his work as grotesque, luminescent creatures, light beams, macabre monsters, naked women and fish-like beings. When he became gravely ill at the age of 45 and stood on the verge of death, his medications gave him hallucinations often featuring pine trees that since then often appear in his creations. This episode renewed Tanaami’s creative energy, exacerbating his consciousness of the fragility of life. This close encounter with death also eventually brought him to the idea of the bridge as a connection between this world and the next, but also as a metaphor for the journey of life itself as the title of this exhibition suggests. 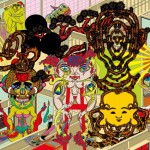 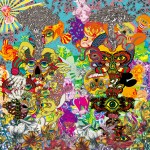 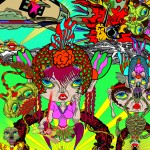 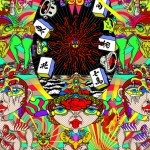 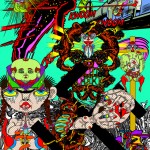 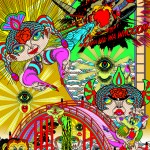 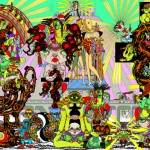 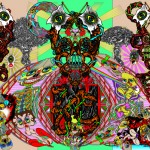 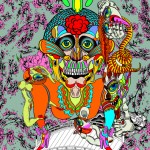 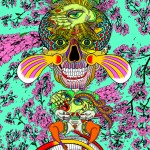 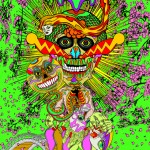