Mizuma Gallery is delighted to present HISASHI TENMYOUYA X INDIEGUERILLAS, an exhibition curated by prominent Japanese and Indonesian contemporary artists. The show brings two eastern cultures to meet under an unusual vector of approaching contemporary art. Though both countries have similarities in the way many asian countries do, they have a very different history. Indonesia has been colonized both by the west and the east for hundreds of years while Japan has never been completely colonized before. This sets an interesting array of differences in the way art develops in the country and how artists evolve by digesting foreign influences. In the exhibition we can see how cultural influences travel around internally and the differences that set these asian countries’ identity.

Tenmyouya Hisashi (天明屋尚), was born in 1966 in Tokyo, Japan. His unique Japanese painting technique, “Neo Nihonga” revives Japanese traditional paintings in contemporary art. The artist also created his new style “Butouha” in 2000 which shows the resistant attitude towards authoritative art system through his paintings. In 2010 he proposed a new Japanese art scheme named “BASARA” which embodied  extravagant and extraordinary samurai aesthetic; like “Basara” in Nanboku era and “Kabuki-mono” in the end of Sengoku era.

Tenmyouya has won a lot of awards such as winner of 11th “Japan Graphic Exhibition”, judge Prize “JACA’97″ in 1990,  special prize of “8th Lichtex Biennale” (1997), encouragement Prize “6th Exhibition of the Taro Okamoto Memorial Award for Contemporary Art ” in 2001 and many more. He is also the only Japanese artist selected to design for the FIFA World Cup Germany Poster in 2006.

INOUE Yuki is one of the most notable contemporary artist in Japan who mainly creates original creature sculptures. The main subject of his sculptures are salamanders. His works features are very unique and stylish. He adds Japanese traditional motif in a tattoo like format such as found in his sculpture “IREZUMI” depicting “Kabuki” performers and courtesans. Japanese motifs on the body of his sculptures has become his trademark. Yuki INOUE was also selected in 4th International Sculpture Symposiums of Buyukcekmece, Istanbul – Turkey 2005.

Tsujino Hiroaki creates symmetrical interfaces—input/output devices activated with switches, LEDs, speakers and other accessories. He believes that human, as well, is composed of interfaces (e.g. eyes, ears, hands) that are symmetrical between the left and right side of the body. Perhaps the act of creating an interface with symmetry between left and right sectors is also the act of depicting a human being.

Miki Katoh graduated from  Joshibi Painting Department 1999. Being educated in the japanese traditional painting genre, the artist revives the beauty of Japanese painting that was once the pillar of Japanese art using gouache rather than Japanese pigment. She works using vivid color pallete to add a contemporary touch to the beautiful traditional style.

TSUJIKAWA Nami is a self-taught artist whose wild and fantastical works have been described by critics as a hybrid of Western and Eastern influences. Her works reject homogeneity and use unusual mixes of ethnical elements as she pursues excessive ornateness. Tsujikawa is a typical follower of what is known as basara, a flamboyant style of aesthetics that counters Japan’s traditional appreciation of frugality and humbleness. Her works, with their outrageous embellishments have been said to disorient viewers, making them feel as if they are trapped by a never-ending labyrinth of art.

Founded in 1999, Indieguerillas is husband and wife duo Santi Ariestyowanti (b. 1977), and Dyatmiko “Miko” Bawono (b.1975), who are based in Yogyakarta, Indonesia.Their creative academic backgrounds were in the design field; Santi has a degree in Visual Communication Design and Miko has a degree in Interior Design. Both are alumni of The Faculty of Art of the Indonesian Institute of the Arts in Yogyakarta (ISI Yogyakarta). Not only they are well known for their interest in Javanese folklore and contemporary urban culture, Indieguerillas are also recognised for their proficiency at visual effects and inter-media experimentation.

Indieguerillas is one of most successful artist in Indonesia. Their previous exhibition includes the “4th Guangzhou Triennial at Guangdong Museum of Art 2011″, “54th International Art Exhibition La Biennale : Future Pass – From Asia to the world”, “Venice Bienalle 2011″, “Animamix Biennale at MOCA Taipei 2009″, and the list goes on.

Her works narrate the daily experience of life, expressed through simple and familiar objects with detailed visual elements. Most often Restu uses watercolor, ink and paper. Restu’s strength of narrative telling enables her work to find its voice through the every-day objects she often place at the centre of attention. Aside from creating paintings and drawings, Restu creates art videos and installations from watercolor drawings in paper. In 2011, she received a residency program from Cemeti Art House Yogyakarta in “Hotwave #1” . She also participated in “Biennale Jogja XII”, 2013.

Agung Prabowo also known as Agugn is a professional printmaking artist, specialising in linocut technique. His practice apply reductive linocut technique in  which a sheet of linoleum is used and later inked with a roller, then impressed on to fabric or paper. The artist is highly regarded for his technical achievement, concieving suggestive work and brilliant colors. Agung’s artworks represent how artist uses art to make sense out the reality of life. Agung won the 1st prize of “Print Making Triennale”, Indonesia IV, 2012. Currently he is one of the best young print making artist in Indonesia.

Yudi Sulistya is known for his unique sculptures made from papers. The artist’s family struggled with economical condition when he was a boy, thus young Yudi was not able to buy his own toys. His poor economic condition drove him to creatively made toys from papers and found objects.  Yudi’s Artwork is speaking about reality, of how life is not permanent and very weak. His fascination towards mechanics and military vehicles (tank, canon, etc) is realised by his sculptures; contrasting the well achieved metal and steel look with paper materials . In 2007 he received “Kosasih Awards” and in 2003 he became a finalist of  ”Indofood Art Awards”. He also participated in “Jakarta Biennale”, 2011. 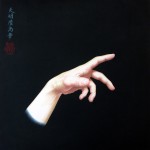 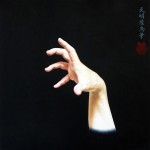 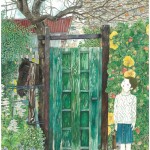 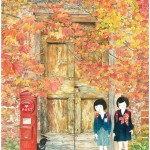 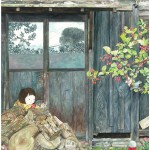 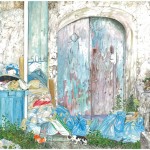 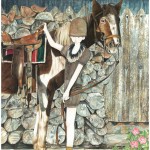 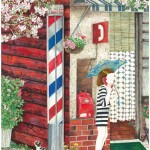 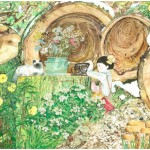 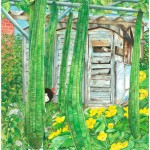 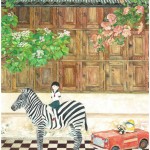 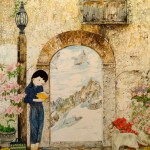 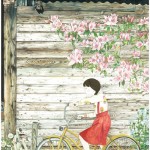 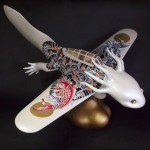 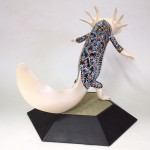 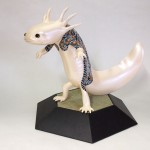 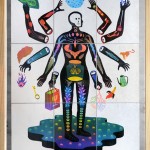 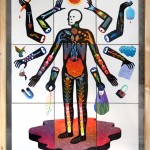 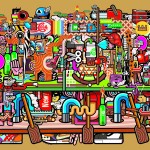 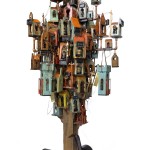 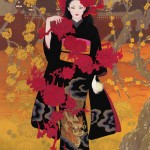 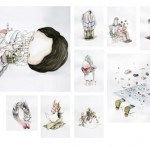 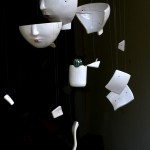 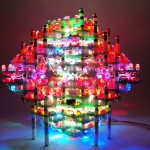 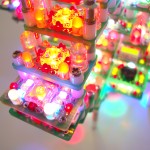 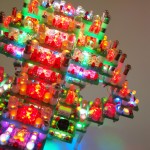 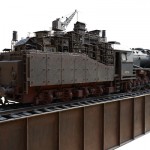