In Beyond Painting, the exhibition curator Hermanto Soerjanto sought to highlight the importance of media and technique in the art-making process, and how it has developed over time. Based on his observations, there has been no new developments in art after the emergence of pop art. But the contemporary era has brought a more liberal platform for the development of art, in terms of the use of media and technique in creating artworks, as well as the influence of diverse cultures and locality.

Empowered by the advancement of technology, our modern world has provided art with limitless possibilities to grow. We can witness this in the works of artists such as teamLab and Refik Anadol, who employed computer technology and big data science as their main media of art; or Olafur Eliasson and Tomás Saraceno who employed alternative materials, including life spiders and spider web in their artworks. In Southeast Asia, we see artists who have adopted technology as their main body of work, as well as the ones who revisit their traditional and cultural roots, bringing that knowledge and making it relevant in contemporary culture. These phenomena are clearly evident in the works of Alexander Sebastianus, who uses the traditional weaving technique to create artworks that are relevant to the contemporary art scene. Similarly, Ari Bayuaji who also employs weaving techniques in his works and embraces the local Balinese daily culture of ngayah (mutual cooperation in the temple’s activities) into his process. He engages the community of Sanur that was economically impacted by the Covid-19 pandemic to be involved in the creation of his art works.

Multi-disciplinary artist Ezzam Rahman creates flower-like sculptures made from the dry callouses of his own feet, with the final sculptures displayed inside bell jars. The idea behind using this material came from the word Melayu, or ‘withered’, when directly translated to English. Melayu also refers to the Malay ethnicity which, in this context, Ezzam refers to his own identity as a Melayu.

Dawn Ng, Kanchana Gupta, and Widi Pangestu work with conventional art materials but with a different awareness and point of view. Dawn Ng’s main body of works are film and photography. Her works presented in this show capture the moving image of an ice block melting. She uses the method of surveillance to take video and photos of the melting process, which over time, reveals the coloured layers inside the ice. The artworks produced essentially are her attempts in ‘capturing time’.

Kanchana Gupta’s works take acrylic paint to a different level. Instead of applying the paint onto a canvas, she instead lays them onto a piece of jute, lets it dry, and later peels off those individual layers, subsequently stacking them together. The creases and imperfections of the paint layers develop into beautiful abstract works. Whereas Widi Pangestu approaches paper with a different perspective. Paper that normally functions as a surface to hold paint, ink, or any other coloured materials, is used as the main media of the work itself. In Widi’s process, he takes the paper back into its pulp form, and sculpts it to create three-dimensional abstract works.

The exhibition curator, Hermanto Soerjanto, observes that in the past, there had been too many techniques and materials that were excluded from art practices. In this contemporary age where anything could be art and art could be anything, it has given a limitless area to grow for the development of art.

Beyond Painting, a group exhibition curated by Hermanto Soerjanto featuring artworks by Alexander Sebastianus, Ari Bayuaji, Dawn Ng, Ezzam Rahman, Kanchana Gupta, and Widi Pangestu will run from 15 October to 13 November 2022 at Mizuma Gallery, 22 Lock Road #01-34 Gillman Barracks, Singapore 108939. The gallery will open from 11am-7pm on Tuesdays to Saturdays, and 11am-6pm on Sundays. The gallery will be closed on Mondays and Public Holidays. 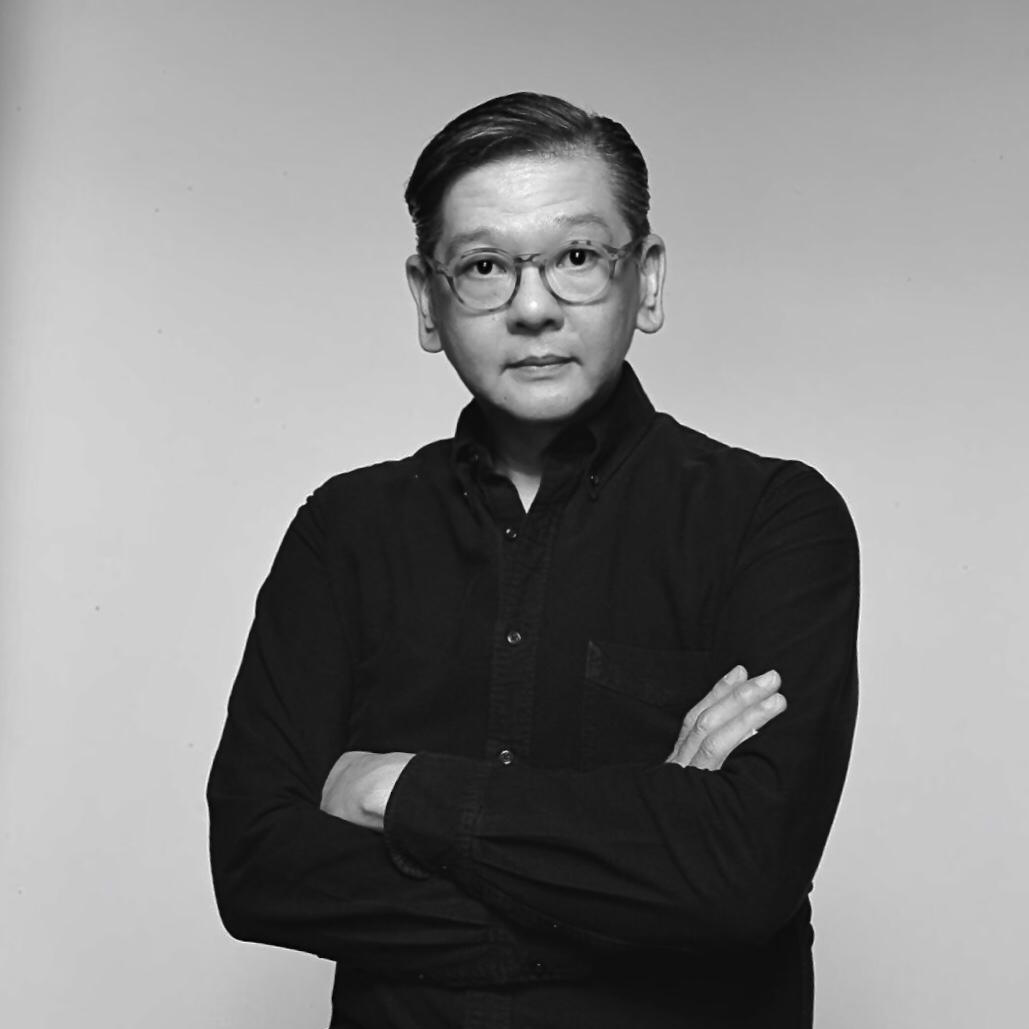 Hermanto Soerjanto (b. 1970, Indonesia) went to Palin School of Arts & Design in Singapore and Akademi Teknik Desain Interior (ATDI) in Jakarta, Indonesia, before joining Cipta Citra advertising agency in 1994. Since then, he has built his career in the field of advertising and currently holds a position at Pantarei Communications as Chief Creative Officer. As an art collector, Hermanto is familiar with Indonesian artists, having spent much time conversing with them and visiting their studios. In 2008, he established GARIS Artspace, an art gallery in Jakarta showcasing works by contemporary Indonesian artists, where he organises and curates the exhibitions on a regular basis. To date, Hermanto has organised several exhibitions, most notably Ethnicity Now, a group exhibition at Galeri Nasional Indonesia, Jakarta, Indonesia (2010); and Unveiling Fundamentals in Contemporary Art Through Asia at OHD Museum, Magelang, Indonesia (2015). His strong knowledge and dedicated passion to the arts has been recognised by Benesse Art Site Naoshima, Japan who appointed him as their first International Ambassador in 2019. Hermanto Soerjanto lives and works in Jakarta, Indonesia. 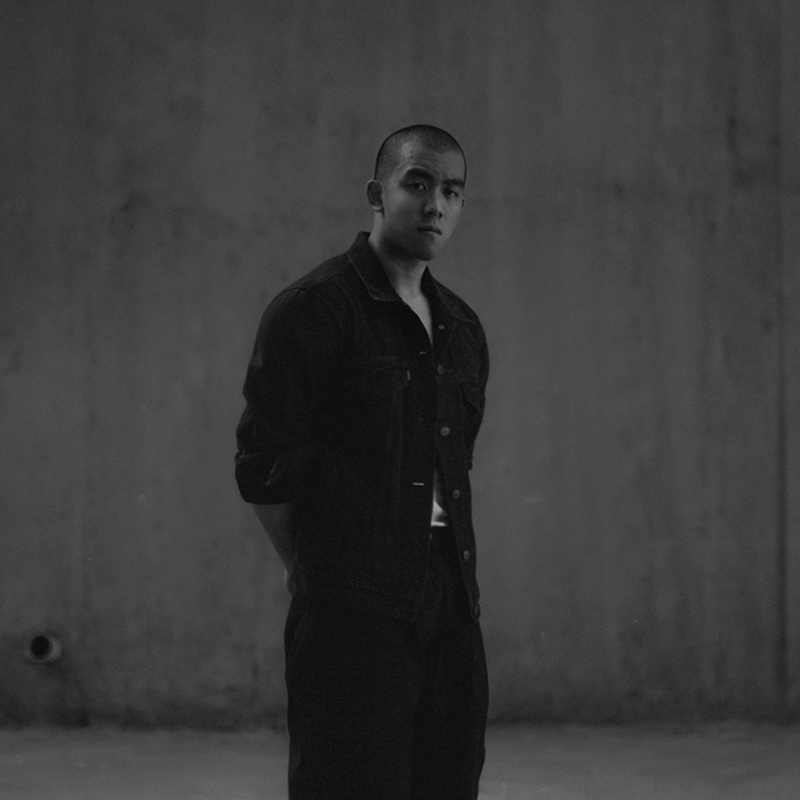 Alexander Sebastianus (b. 1995, East Java, Indonesia) graduated with a Bachelor of Fine Arts (Fine Arts 3D) from the Massachusetts College of Art & Design, Boston, USA in 2018. Alexander uses experiential ethnographic re/search as a prominent intertwining mode of existence. His works explore the decontextualization of material cultures and how it is perceived, understood and ritualised in practice. Prior to his comparative art studies, Alexander was an apprentice for a Javanese master weaver, in East Java. His exhibitions include ABDI ALAM pt. I at Omah Budoyo, ISA Art and Design, Yogyakarta, Indonesia (2021); Interwoven: A weavers recalling of time at Art Agenda, Jakarta, Indonesia (2020); and Dari (Coming froms) at DMC 103 | Boston, USA (2018), amongst others. Alexander has undertaken residencies at Monson Arts, Maine, USA (2018) and Haystack Mountain School of Craft, Maine, USA (2017). He was awarded the William Daley Award for Excellence in Art History and Craft (2017); and the Massachusetts College of Art & Design: Fiber Arts Departmental Honors (2018). Alexander Sebastianus lives and works in Jakarta, Indonesia, where he works as a textile craft school developer and ethnographer at Rumah Sukkha Citta. 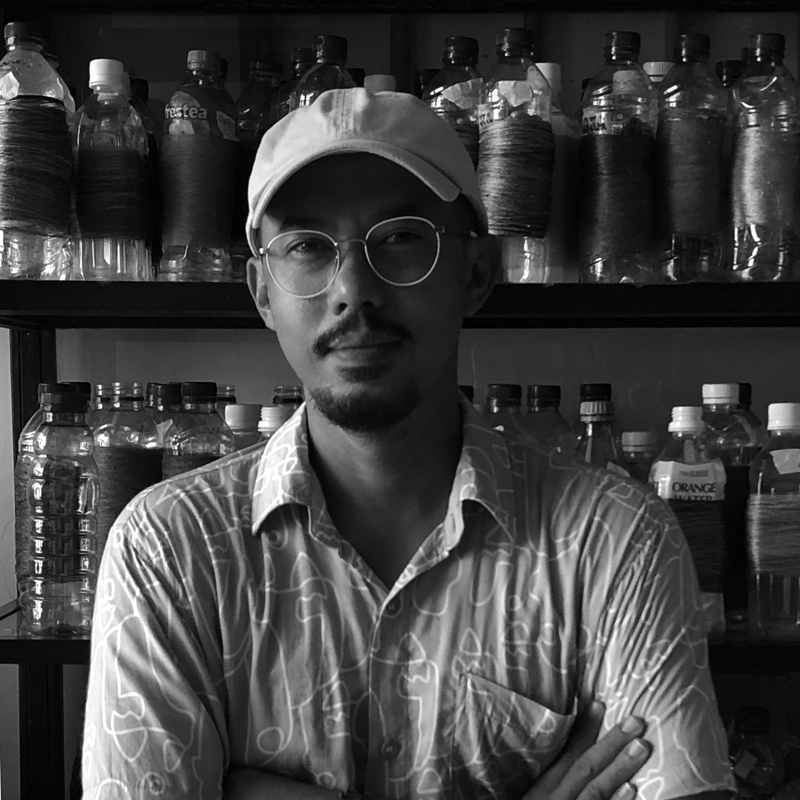 Ari Bayuaji (b. 1975, Mojokerto, Indonesia) graduated in Fine Arts from Concordia University, Montreal, Canada in 2010 after migrating to Canada in 2005. Ari is known mainly for his art installations that incorporate the use of found and ready-made objects collected from various parts of the world, allowing him to be exposed to different cultural traditions. He is an expert in conveying aspects of daily life within a culture as his works often expose the overlooked artistic value in everyday life expressed through objects and places and their roles within a society. Ari has held major solo exhibitions in Singapore; Taipei, Taiwan; Ste-Alvère, France; Dusseldorf, Germany; Rotterdam and The Hague, The Netherlands; and Yogyakarta, Indonesia. He has undertaken residencies in Contemporary Art International Symposium, Baie-Saint-Paul QC Canada (2018); La Residence d’Artiste La Fondation Agnes B. Paris, ‘Yves de la Tour d’Auvergne’, Sainte-Alvere, Sainte-Alvère, France (2017); and Kunsthal Rotterdam, Rotterdam, The Netherlands (2017); amongst others. His works are in the collections of Musée des Beaux Arts de Montréal, Montreal, Canada, and Musée National du Québec, Québec City, Canada. Ari Bayuaji lives and works between Montreal, Canada and Bali, Indonesia. 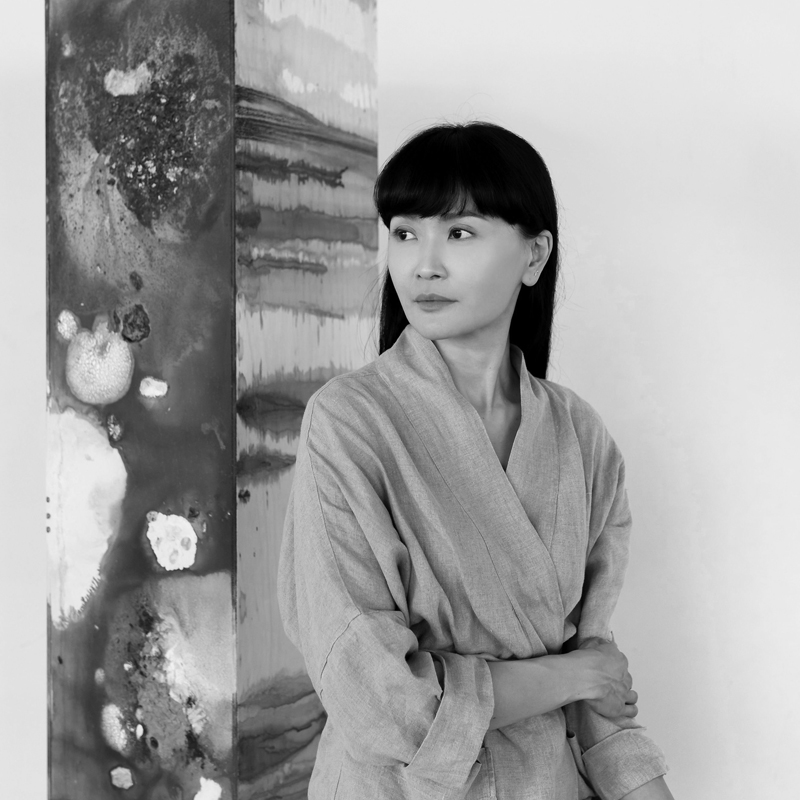 Dawn Ng (b. 1982, Singapore) graduated in 2005 with a Magna cum Laude in Studio Art and English at Georgetown University, Washington DC, USA; and the UCL Slade School of Fine Art, London, UK. Dawn is a multi-disciplinary visual artist, who has worked across a breadth of mediums, motives and scale, including sculpture, photography, light, film, collage, painting and large scale installations. Her practice deals with time, memory and the ephemeral. Often characterized by lyricism and a nuanced use of colour, Dawn’s work has been acquired by the Singapore Art Museum, and exhibited at the Musee d’art contemporain de Lyon, and the Lille3000 art festival, France. She has had solos in Art Basel Hong Kong and the Art Paris Art Fair, and shown in Sydney, Shanghai, Jakarta and New York. In 2016, Dawn was commissioned by the Hermes Foundation to inaugurate their Singapore gallery with a solo installation, and was also part of the Jeju Biennale, Korea in 2017. In 2019, Dawn was commissioned to fill a wing of the Art Science Museum for their Floating Utopias exhibition, and opened a commissioned solo at the Asian Civilisations Museum in 2020. Dawn Ng lives and works in Singapore.

Ezzam Rahman (b. 1981, Singapore) graduated with a Masters of Arts, Fine Arts from Goldsmiths, University of London, LASALLE College of the Arts (2017). He is a multi-disciplinary artist known for his interest in the body and the use of common, easily accessible, yet unconventional media in his art practice. Working across sculpture, installation, digital and performance, he creates works that are often time-based and ephemeral, aiming to pique viewers’ thoughts on the themes of body politics, impermanence, traces, and abjection. As a performance artist, Ezzam has performed extensively both regionally and internationally. His exhibitions include is there any way i can be in your arms tonight, SAMMMM, Singapore Art Museum Mini Mobile Museum (2019/20); i will leave a light on for you, OH! Open House, Singapore (2019); The Senses; Breathe between Excess and Deficiency, Myungju Art Center, Gangneung, Gangwon Province, South Korea (2022), amongst others. His accolades include Most Promising Award, Photography Category for PULSE Awards, Thailand (2021); Joint Grand Prize for the President’s Young Talents, Singapore Art Museum (2015). Ezzam Rahman lives and works in Singapore, where he serves as the Artistic Director of The Substation. 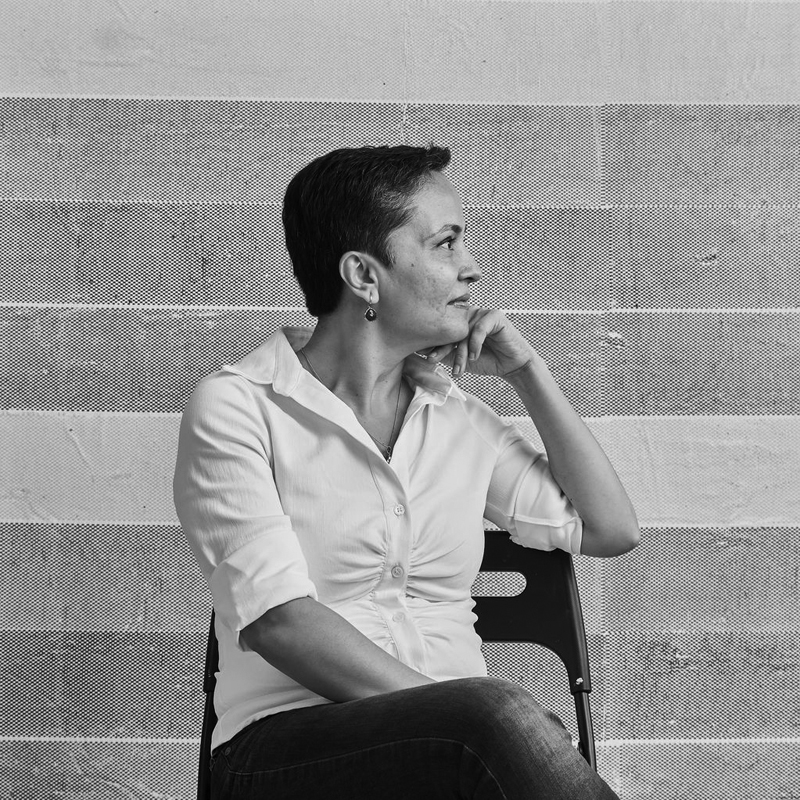 Originally from India, Kanchana Gupta (b. 1974) currently lives and works in Singapore. She received an MA in Fine Arts from LASALLE College of Arts, Singapore in 2016, where she was the recipient of the Dr. Winston Oh Travel Research Award. Kanchana’s on-going fascination with the materiality of paint has seen her investigate the physicality of the medium in her two-dimensional works, mixed media, and more recently through her sculptural installations. Her practice has been described as a process driven exploration of and in response to, urban environments. The pressures of unprecedented migrations, rapid urbanisations and overwhelming globalisation are expressed through the extreme manual and industrial duress that she subjects her medium to. Her works have been featured in numerous exhibitions locally and internationally, including three solo shows in Singapore. Her work was recently included in The Sceneries and Portraits of an Era – Featuring the Asia Collection of Benesse Art Site Naoshima at the Fukutake House Asian Gallery, Shodoshima, Japan (2020). 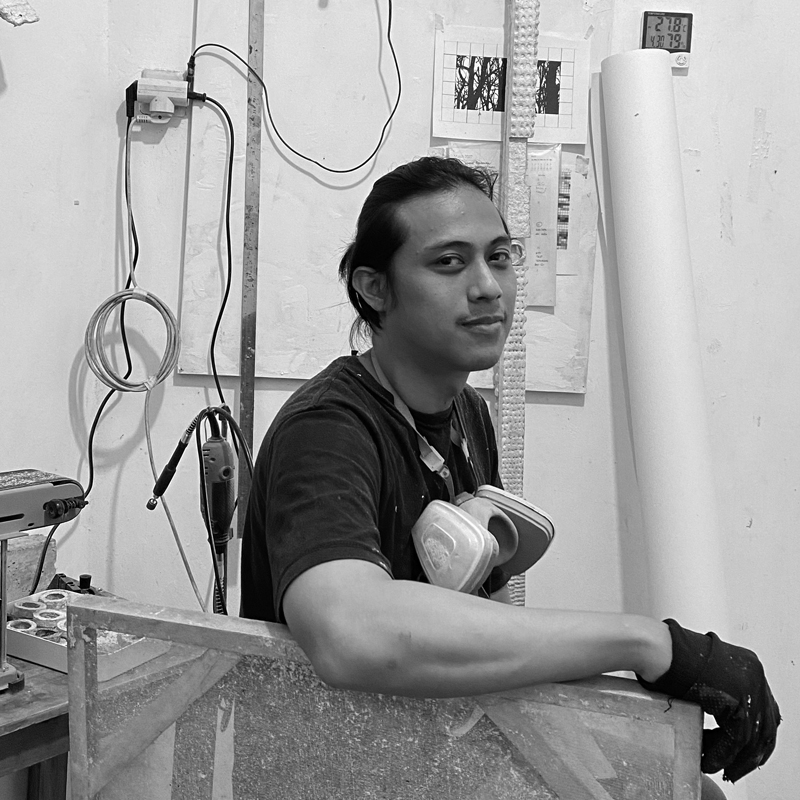 Widi Pangestu (b. 1993, Bandung, Indonesia) graduated with a Bachelor in Fine Arts (Painting) from the Indonesia Institute of Arts (ISI), Yogyakarta, Indonesia in 2021. Mainly working with the paper medium, Widi’s experimentations take place inside the spectrum of material-crafting, focusing on the image-making, object-making, and the details of the experimentation process as a work of artistic research. It explores the possibilities in material-crafting through different traditional (manual) preferences, while colliding them with rhetorical experiences encountered during the process. Widi works are then presented to emphasise how human relations are carried out through the transformation of paper materials. The biomorphic quality in the work and the fragility it presents are a form of intersection between organic principles and the practice of an industrial society. His notable exhibitions include Making Sense of Sense Making at Ace House, Yogyakarta, Indonesia (2021); Everything in Between at Indonesia Contemporary Art Network (ICAN), Yogyakarta, Indonesia (2017), among others. Widi was a Finalist in the 39th UOB Painting of the Year competition in 2019. Widi Pangestu lives and works in Yogyakarta, Indonesia. 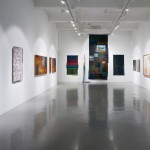 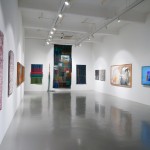 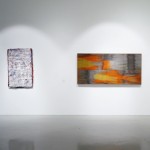 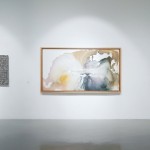 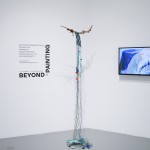 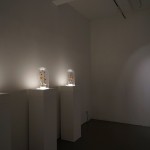 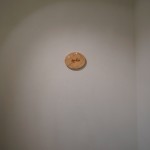 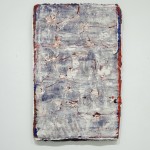 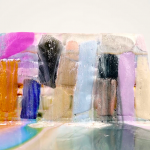 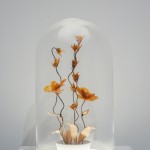 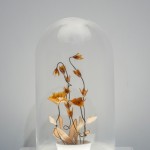 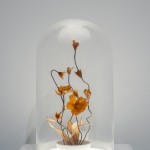